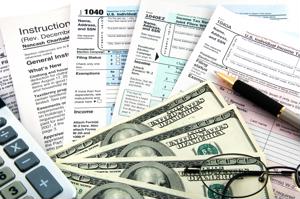 The April 15th tax filing deadline is quickly approaching, and many Americans who are awaiting the receipt of their refunds already have big plans in mind as to how they will spend it.

Capital One Bank's annual Taxes and Savings survey found that most filers plan to spend all or part of their refunds, while only a small percentage will put the money into a savings or investment account. The average refund will be $2,803, and 65 percent of survey respondents don't factor tax windfalls into their annual budgets. After they receive their money, the majority of respondents - 30 percent - said they will spend it on daily expenses and necessities. Twenty-three percent said they will put their refund toward a vacation, followed closely by 22 percent who will use the money to pay down debt. The number of Americans who plan to save their refund was tied with those who plan to spend it on clothing and accessories at 16 percent.

"At a time when people are seeing smaller paychecks, now more than ever they should take a step back, evaluate their financial goals and consider saving their tax refund," said Mickey Konson , managing vice president for Retail Banking at Capital One Bank . "People tend to think of their tax refund as free money or an annual bonus, which makes it very tempting to spend it right away, but remember, that refund is your own money - without added interest. Tax season is a great time to plan ahead, with an eye toward your financial goals."

Individuals might consider splitting their tax refund among various accounts to help them accomplish several goals. For example, filers can provide Form 8888 to their tax preparer when completing their income taxes, which outlines up to three separate accounts in which their refund may be deposited. This may allow filers to put a portion into savings, while devoting another chunk to checking or an account that is used with a specific goal in mind.

Liberty Tax Service® (NASDAQ: TAX) has prepared over 2 million tax returns in 2012 alone and has over 3,000 offices in the United States and Canada. As the fastest growing tax franchise ever, Liberty Tax®'s total revenues grew to $109.1 million last tax season. Liberty Tax® stands behinds community enrichment efforts by sponsoring various non-profit organizations and urging their employees and franchisees to give back to their communities.